Ammon Express and NTNG travels you to the ancient Dion for an unforgettable theatrical experience!

Theatrical Play and Excursion all in one! 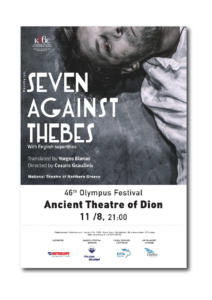 On AUGUST 11th, AMMON EXPRESS is traveling you easily, quickly and simply to the ancient Dion for an unforgettable theatrical experience
“Seven Against Thebes”.

In collaboration with the National Theater of Northern Greece, the first on-line platform for Cultural Tourism gives you the opportunity of an experience that combines the dynamics of Greek Culture and Tourism.The tour of the renowned archaeological treasures of ancient Dion, in the shadow of Mount Olympus and then the theatrical play of the Aeschylus ancient tragedy is what makes the excursion on August 11th not just special, but also unique!

The performance of the National Theater of Northern Greece «Seven Against Thebes», will be presented at the Ancient Theater of Dion, on Friday, August 11th.

AMMON EXPRESS offers you the opportunity to visit the archaeological site of Dion and see the ancient tragedy with English super-titles for just 34,99 euros!
(The ticket of the show is included – 15 €, but not the entry ticket at the Archaeological site – 8 €).

The distance is 90 km and the trip lasts approximately 1 ½ hour and the bus arrives directly to the archaeological site.

At 18:30, arriving at Dion and touring the archaeological site and the museum.
At 20:00 30minute stop for coffee and snacks.
At 20:45 meeting outside the ancient theater.
At 21:00 sharp the play begins and lasts approximately 2,5 hours.
At 23:30, departure for Thessaloniki and return after approximately one and a half hour to the same stops where we started.

The gallery was not found!

The conflict between the two sons of Oedipus is the theme of “Seven Against Thebes”. After his appalling actions were revealed to him, Oedipus left the throne to his two sons, Eteocles and Polynices. The two agreed to rule Thebes alternately. However, when the time came for Polynices to take reign, Eteocles did not keep his promise. This provoked the wrath of Polynices, who allied with the king of Argos Adrastus and organized a military campaign against Thebes. Seven leaders of each of the two rival armies lined up on either side of the seven gates of Thebes. Eteocles and Polynices faced one another in front of the seventh gate.

The famous Lithuanian director Cezaris Grauzinis, the mind behind the play, comments :
It seems, that all of us –not only people in Greece, but the people in the whole of Europe– are living with a feeling as if deathly threatening enemies are standing outside the fragile walls of our common miserable, but still comfortable, lives. We need a tragedy, in order to rediscover again that we are, nevertheless, humans and that our human fate is to be united.The iron and steel will turn to dust, we will remain in existence.

All of us are taking a challenge to explore, how the instinct of our common survival is going along with our need to remain human… which we have inherited from our ancestors, and which we are obliged to pass to our own children, against fear, against insecurity, against desperation.