Ammon Express is traveling you to Dion for a unique theatrical experience! 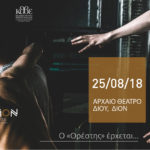 Ammon Express is traveling you to Dion for a unique theatrical experience!

On August 25th, Ammon Express is traveling you easily, quickly and simply to the Ancient Dion for an unforgettable theatrical experience.

In collaboration with the National Theater of Northern Greece, the first on-line platform for Cultural Tourism gives you the opportunity of an experience that combines the dynamics of Greek Culture and Tourism.

The tour of the renowned archaeological treasures of ancient Dion, in the shadow of Mount Olympus and then the theatrical play, «ORESTES» by Euripides, one of the most important works of the Greek tragic poet, is what makes the excursion on August 25th not just special, but also unique!

The performance of the National Theater of Northern Greece, «ORESTES» by Euripides, will be presented at the Ancient Theater of Dion, on Saturday, August 25th.

The bus of ΑΜΜΟΝ EXPRESS, departs

• στις 17:00 from the White Tower,
• στις 17:05 from the hotel Makedonia Palace,
• στις 17:15 from Aristoteles square & Egnatia road (at the statue of Venizelos),
• στις 17:20 from Capsis Hotel and
• στις 17:25 from The Met Hotel having as destination the ancient Dion and the mythical Mount Olympus, the mountain residence of the 12 gods of ancient Greek mythology.

The distance is 90 km and the trip lasts approximately 1 ½ hours and the bus arrives directly to the archaeological site.

– At 19:00, arriving at the archaeological site and the museum.
– At 20:15 30minute stop for coffee and snacks.
– At 20:45 meeting outside the ancient theater.
– At 21:00 sharp the play begins and lasts approximately 2 hours.
– At 23:30, departure for Thessaloniki and return after approximately one and a half hour to the same stops where we started. 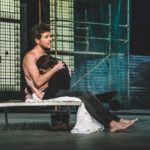 Three young people, Orestes, Electra and Pylades, try to wade through the maelstrom of blood that sucks them in. Gods and men have weaved a plot of hatred and revenge, where fraternal and a friend’s love becomes complicity and the people’s verdict a death sentence.

Euripides wrote “Orestes” during an anti-heroic era and the context of his play reflects this state of mind. Nowadays, we live in a period such as this and I am not only referring to Europe or the recent years of economic crisis.
“Orestes” premiers in a world where our values are shaken and the need for survival brings to light our mortal nature. The characters become coarser, the souls agitated and our thoughts blur. How can you be calm and what can you hold on to, when your blood boils and you find the End is nigh as you bound
towards it? Through our performance, we will try to determine the citizen’s place in a tumultuous nation, but also the place of a nation that punishes itself by punishing its people. And if there is something that sets us apart from Orestes’ Myth, it is that we all know that there is no “Deus ex machina”